In the run up to Halloween I had the pleasure to be part of a big budget music video shoot for an international TV channel China I supermodel!. For me this was an opportunity to experience life on a professional shoot. I was nervous to say the least in regards to how I would cope with the responsibility and the busy environment. I was keen to do my best and make sure I was of great help to my boss. The shoot would take us around the more scenic parts of Northern Ireland (around NI in 2 days) The first day took us to Donaghdee (no beach and ice cream today). We would be filming at a local restaurant and around the pier/harbour area. The latter is a truly stunning part of the town and would film beautifully especially from a drone (oops spoiler alert). One of my jobs for the day was to ensure everyone in our crew signed a release and non-disclosure agreement, I was very firm in making sure everyone signed one as it was important due to the confidentiality of the project. The talent of the shoot the man-band were great to work with and they
were flawless in the delivery of their song. it truy was a great pleasure to be involved in this project.

I also heLped with organizing equipment and ensuring it was stored away safely until it was needed, there was so much equipment counting cameras, lights, extension leads and other “techy” stuff. We could have made a feature film while we where at it. My main worry on the shoot was that I might end up with little to do and be seen as a hindrance. But luckily I had plenty to do and that’s a tip for working on big projects like this, keep busy and you will be praised for if you sit around and do nothing then they’ll think you’re part of the furniture (A Smoking Sofa!). As Day 1 drew to a close I look back and relaize
just how busy and mad it is on a real video shoot but I welcome the challenge as it will prepare for other big projects in my future career

If you thought Day 1 was busy then think again, Day 2 proved to be even crazier as we had to film in 2 locations within whatever light we had (Thank you very much Northern Ireland weather). Location 1 was an old Irish castle near the sea so the main challenge was running from the castle and up the hill to our makeshift green room (great exercise) and then onto the dark hedges, the dark hedges was proboably the exciting part due to the may effects we had going in and through our wonderful talent everything filmed beautifully. Overall I felt very privileged to have been part of such a
big project and hope to use the experience i gained into future projects with BMV. 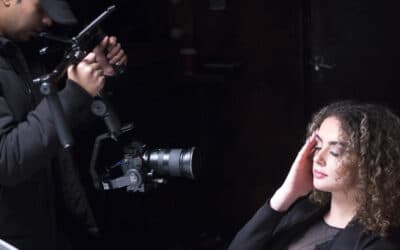